As a frequent cruiser, while wandering around various ships like the lost nomad I am, I often make friends with international cruise staff. More often than not, cruise workers are from countries where job opportunities are not as great, and having the chance to see the world, make money to send home to loved ones, and create lasting friendships with like-minded adventurous people is something that can’t be passed up.

However, I will also stress that this isn’t always the case. On a recent Royal Caribbean Explorer of the Seas cruise,  I met a Swedish girl who told me that she wanted to be a singer and dancer, but in Sweden, if you don’t follow the traditional career paths, you are often shunned by friends since there is a push to fit in and be “normal,” so working on the ship was her chance to meet new people and follow her dream of being an entertainer.

Regardless of why one works on a cruise ship, there are a ton of perks you literally get paid to travel, hang out with other kids who are fun as you, and meet people from all walks of life. Cons exist as well, of course – one being that working on one is really freakin’ hard. You work long hours, seven days a week, only pausing for a little under two months after each six month period. You have little time off in port and you live in close quarters with people who start off as complete strangers to you. You’re away from your friends, family, and children, which becomes a huge burden as you grow up and become a real-life adult.

Often when I go on cruises and meet these cruise workers, I ponder the pros and cons of the operation, since it seems like a pretty fun job and a great way to live in a college dorm again and travel the world. When it comes down to it though, I end up figuring that I’m probably not really cut out for such a life and I’m better off trying to find an easier way to see the world, have some fun, and pursue my career aspirations. 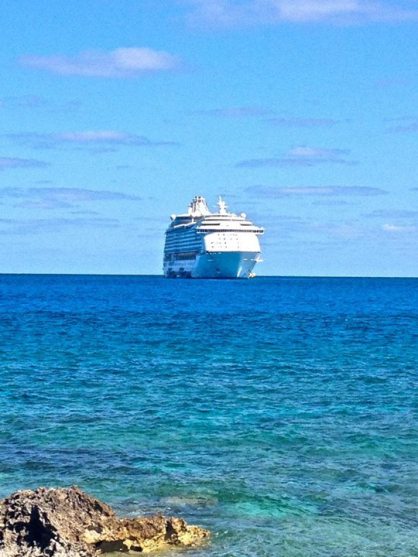 On my last cruise, though, I really wondered what the hell I was thinking. The last stop on many Caribbean cruises is Coco Cay, a small touristed-out island near the Bahamas where ships unload their passengers so they can hang out on the beach, play some water sports, and snorkel or scuba dive. Each time I visit this island, I participate in a fantastic hour-and-a-half long jet skiing tour, where one tour guide leads happy adrenaline junkies around some Bahamian islands, periodically stopping at points to see sharks, swim around, or look at starfish. It’s a really cool, fast-paced and independent tour that makes you feel like you just hit the jackpot at Six Flags.

Since my parents locked all my crap in a locker when they went jet skiing and I was stuck wandering around half naked burning like a lobster, I hung around the hot Brazilian tour guides (who did not even notice I existed). The snippets of conversation I heard went along the lines of:

“Yeah, when my seven month contract ends, I’m going to go home to Brazil for a week or two, but then I’m off to Mexico to cave dive and then to Australia for a few weeks of backpacking.”

I was stopped dead in my fried, red tracks. Had I been living on another planet? How had I dared to think that a life like that wasn’t worthwhile just because they had to work a few extra hours a week? The bottom line was pretty simple. I live in freezing-cold New Jersey, where I commute an hour and a half and get home around 6:30 so I can make dinner, feed the cat, plan my outfit for the next day. On the weekends, I go out; try to make plans with friends. This Brazilian dude conducts jet skiing tours in the Bahamas and then after seven months of sunshine, he goes friggin’ cave diving and backpacking. Who am I to say my 401k is more rewarding than that?

I’m not saying that I’m the newest applicant for Royal Caribbean (or Carnival, either). I’m not saying I’ll ever work on a cruise ship or volunteer to bust my ass seven days a week or make it seven months without seeing one familiar face. All I’m saying is that a little patch of life like that from a tanned, happy man can pretty quickly make you reconsider what you’ve been doing everyday for eight hours a day – whether it makes you appreciate a quiet life with family or a wild life on the open seas.

Being that I spend a lot of free time scourging travel blogs on the Internet, there is one phrase that I often come across that really gets under my skin…

It was the best place I’ve ever been.

Oh yeah, really? The best place you’ve ever been, huh? The most beautiful, fraught with culture and life, brimming with excitement hiding underneath the budding underbelly? Somehow, I doubt that.

Not that I don’t believe a place can be like that, because they are. And that may be the exact issue… that there are many places like this. There cannot be one best place you’ve ever been, because that’s like throwing every destination into prepackaged, nicely organized ribboned boxes, when let’s get real here, Seattle doesn’t have a whole lot in common with Sydney. More accurate phrases would be New Orleans is the craziest city I’ve ever been to. Paris is the most lovely and lacy city I can imagine. I’ve never had so much barbecue as I did in Kansas City.

I can’t really blame people though when they ask me what’s the best place you’ve ever been? because as a journalist, it is exactly these questions that must be asked, this searching for extremes, simply because we want to hear what the hell you can possibly say. On the contrary, being trained as a journalist, you learn to never yourself state these extremes, because you lose your credibility with these dramatic and overused phrases when you’re supposed to stay without a side at all times possible.

However, the way a person responds to these questions says a lot. But a quiet wonder, a shrug of the shoulders, a damnnn I really have no idea… Now it’s those responses I listen awfully closely too. Because those are the ones who have seen the world and live to tell it enough that you have to ask first.

Follow Life Aboard the Traveling Circus on WordPress.com
Join 3,393 other followers