The night of Positano, Andrea, Rosie, Claudia, Claire, and our other roommate Lucy walk to the hostel, which is where the other half of our group apparently lives in luxury. We have a buffet dinner and grab some happy hour drinks, filling up on Coronas and shots. The bartender makes Lucy and I “special drinks,” which seem to be just Sex on the Beach. The wines and beers running through us makes it easy to sit on the rooftop bar and talk as we over look the lights of Sorrento until Andrea calls me.

“Come down here to the dance party!” she says. Expecting a packed group crowding the DJ, we take the elevator down only to see an exuberant Claire and Andrea rocking out to themselves next to a DJ who kind of looks like he wants to go home. We dance with them for awhile, shooing away the creepy Italian boys until Lucy, Claudia, Rosie, and I walk home only to have Andrea and Claire stumble home an hour later.

The next morning, we get on another bus to go to Pompeii in Naples, which we are told only has “men, pizza, and ruins.” A little Italian man named Franco who is dressed in a Hustler shirt and hat gives us a tour of Pompeii, a huge city originally of 15,000, in which 3,000 suffocated under the ash of Mt. Vesuvius, which is visible in the distance along with a little crater at the top which was busted off from lava. We see the sauna, the little homes, and the very first red light district, which is full of stone beds and erotic pictures on the walls that foreigners could point to for the girls. After a couple of cheap souvenirs, gelato (as usual) and some pizza, we are told there’s nothing else left in Naples and we stretch out on a nearly empty seven-hour bus to go home sweet home– Florence. 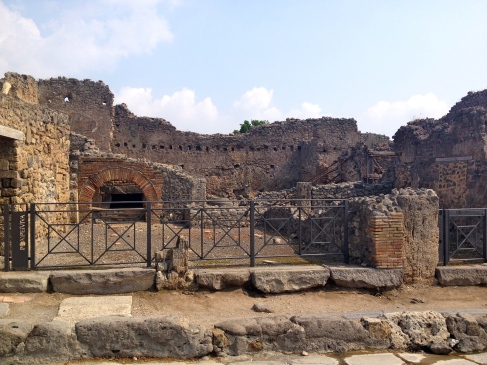