The next morning, we give Oktoberfest a rest for a little while and we go on a bike tour, hosted by Frankie’s Bike Tours, of Munich. At first, it’s pretty difficult for me (once again, a damn little person) to get on one of the huge white bikes, especially drive it around a city that is full of people who can actually bike, buses, cars, and tourists. I ask God to please, please not let me die today.

The tour is pretty cool though, where we stop at a casual enough looking place, Hofbrauhaus Beer Hall. Apparently, though, it’s a place where Hitler gave speeches and the Nazis met up. We also stroll by The Residenz, which is where the Bavarian dukes lived and is a copy of Palazzo Pitti in beautiful Florence. By the Theatinier Church, me and two other girls I am with, Bianca and Colleen, touch the faces underneath the Four Lucky Lions to give us eternal good luck. We stop and eat at the Englischer Beer Garten, which is the second largest beer garden in Europe and has more awesome German food. Apparently, somewhere outside the Hofgarten (the main garden/park in Munich) there is also a man-made surfing wave where people bulk up on their wetsuits (it’s friggin freezing outside) to ride the waves. 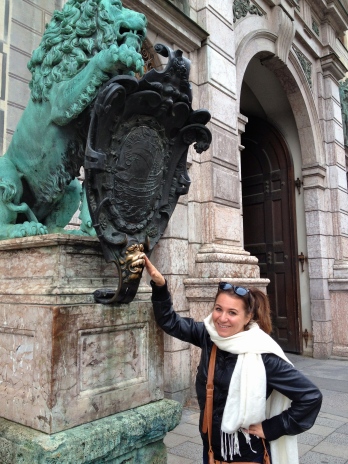 With absolutely no help from our Florence for Fun tour guides, we find the main metro station in Munich after our bike tour and we go to the Dachau Concentration Camp, one of the largest concentration camps that existed in Germany. In the cold rain, it is even creepier to walk through the gates that read “Work Brings Freedom” in German. As we walk down the same path that the Jews walked down to enter the camp “for their own protection,” as the Nazis told them, I can’t imagine what it would be like to never return after just a few hours in the bleak place.

It reminds me a lot of a large, abandoned ranch, with its wide open spaces surrounded by big gray buildings that stuffed 36,000 people inside a space meant for 6,000. Outside of the barracks are big lots where people had to stand for hours each day for Roll Call, and outside the barracks are poles that people were tied up on as torture. At the very end of our walk through the camp, we go to the crematorium on the far left of the camp and we walk through the rooms that people were gassed in and the fake showers that exist there. Seeing things like that make you actually feel the souls that are trapped inside, the thousands and thousands of lives that were lost for nothing. 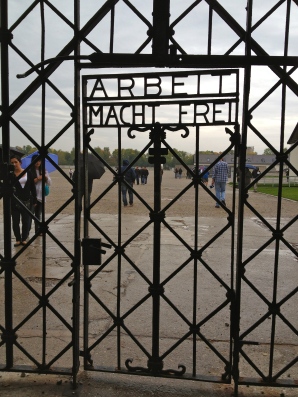 One Reply to “The Rich History of Modern Munich”