I have a confession to make. I am in love. He is a big, strong, strapping lad with lean muscles and a twinkle in his eye. He also happens to be around 511 years old.

One of the things in Florence that I have made my way over to see- twice- is my biffle the David, made by Michelangelo around 1501. Back then, Florence had this huge, yet sort of thinnish piece of marble they were trying to get sculpted into something to be a symbol of freedom and strength for Florence. But all the artists said, “That piece of marble? Puh-lease.”

Well not Michelangelo. He said let’s GOLO and he sculpted David, of the story David and Goliath, although according to him, he only set David free from the marble itself. Michelangelo said that he didn’t really sculpt anything. Instead, he said that his job as an artist was to set the image free that wants to be freed. Originally, the statue stood outside the Palazzo Vecchio (which was kind of like the town hall, where the Medici family worked) in Piazza della Signora, but somewhere along the way, someone figured out that keeping a priceless statue outside probably wasn’t the best plan.

So nowadays, David sits in his nude glory inside the Accademia, where you will literally stand in a line for at least two hours unless you make a reservation. But when you finally get inside, if you turn immediately left… there he is. Right there. Boom. Down the hallway of the Michelangelo room, past the Pietas and a few of Michelangelo’s paintings, is my beautiful man.

I seriously love the David. Fiercely independent and self-assured, nobody messes with him, not even a giant. He doesn’t even care that all he has is a slingshot and seems to have left his tight-whities at home. This is totally okay with him. David wasn’t scared at all when he fought Goliath, even though he was a skinny 17-year-old, because he had God on his side. He says, “Do you know who I am? No seriously, do you?”

And it is in this way that David showcases Florence. Florence is the same way– it doesn’t need anyone else, it doesn’t care if you think it’s old or sort of dirty or smells kind of like garbage sometimes. It says, “Umm, I am really ancient and beautiful and you can like me or not, but I am still going to be my awesome self.” And now that is the real spirit of the Renaissance. 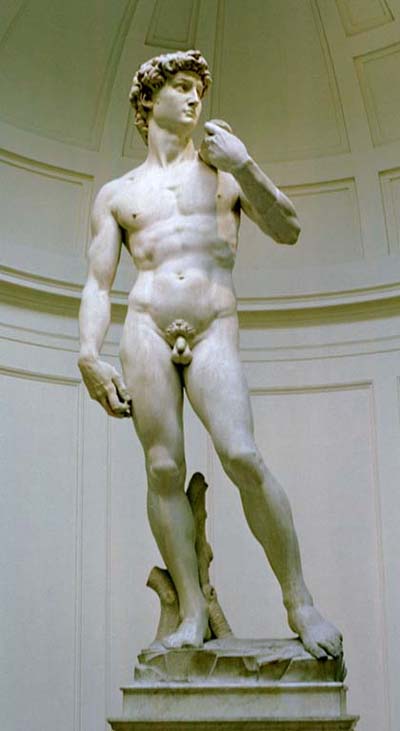 One Reply to “The Renaissance Theory of Love”