So even though we all literally want to die because the pub crawl robbed us of whatever energy we had left and those hostel beds are seriously awesome, we get up at a nice ripe time anyhow to go on an island hopping tour of the islands lining Croatia. Not a bad way to start the day. The second we climb onto the little ferry and take some places on the roof to listen to some music and gander at the sea, boat staff are coming up to us and pouring shots. Please God, NO. No shots. Seriously. It’s 8:00 am.

It’s pretty relaxing to cruise down the Dalmatian Coast, which boasts crystal-clear blue waters and nice views of the marina that hugs Split as well as the never-ending line of white marble buildings that look like they were once fit for a king but now host little restaurants that line the sea. We listen to music once our heads stop thumping and after some time of chilling in the boat, we get to our first island, Solta.

Unlike basically every other place I have ever been to, Solta, or really Croatia in general, hasn’t been sabotaged by tourists quite yet. Croatians are excited to see us as they ask us if we are from California (well jeez, I wish) and a couple of the Croatians hang out up to their knees in the ocean with naked babies and pretty dogs that hang around. It’s a pretty empty island, so we mostly just buy some food and floaties for when we go to the beach later.

Back on our boat, the staff serves us lunch, in which I once again get a whole fish. Unfortunately, I think someone nabbed this one out of the nearest fishbowl and it’s really kind of nasty. Whatevs. Throw it into the ocean, that’s where it came from anyway. They give us wine too, and let me tell you I am no wine connoisseur, but this is the nastiest wine I have ever had. I’m a senior in college and I can’t even chug this stuff down.

Then, we climb back to our perch on the top of the boat and blow up our floaties. Mine has little orange fish all over it and was clearly made for a toddler. Awesome. We boat to the next island, Brac, which is a lot bigger than Solta but is still totally devoid of any tourists whatsoever.

After getting off the boat, we start the hike to the Golden Horn, a beach that is famous for looking like a triangle with trees in the center. We wade around in the freezing cold water a little bit, and then I actually pass out on the beach, which is the best slumber of my life. This beach isn’t littered with tourists and isnt cliched like Mexico or other tourist destinations. It’s hidden from the world and seems delicately pressed into the side of the land, surrounded by trees and filled with deep blue water that looks good enough to drink.

That night, we don’t go to one of the surrounding towns of Split like some of the other students do, but we stay in Split to see the Diocletian Palace by nightfall, which is the most complete Roman ruin in the world. The town is literally built around these ruins and it actually looks a lot like a castle. Wonder why no one booked this place for us to stay. 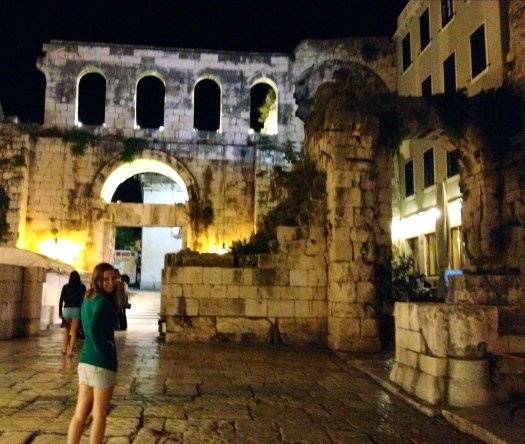 After seeing the Palace and wandering, we do some more exploring of Split and hike up the mountains a little bit to find a nice place to eat. Thank God for me, the dollar kicks the Croatian kuna’s sorry ass, with $100 being equal to about 575 kuna. We eat at a restaurant that I would usually count on my grandparents to take me, and my entire seafood-pasta dish with a house red wine comes to about nine euro. Why did no one tell me to study abroad here?