When studying abroad, you often hear a lot of talk that sounds kind of like this–

“I am never going back.”

“I don’t miss anything about home.”

And I won’t lie, either, sometimes I say these things too. Maybe sometimes others feel differently, but I get the feeling that a lot of this kind of talk is a little dramatized. Okay, yes, I get it- Italy is awesome. Trust me, I am well aware. But when it comes down to it, we have only been here two months. I can barely say a full sentence in Italian and I go home in a month, so I think this keeps Florence outside the realm of my home. Because my real home, as always, will lie on the coast of New Jersey.

Last Monday, Hurricane Sandy kicked the shit out of New Jersey and New York. The largest hurricane to ever hit the Atlantic coast, it has caused $50 billion in damages, according to cnnmoney.com, and killed 88 people in the United States and 68 people in Cuba. Moreover, it has wiped out legendary landmark cities like Seaside Heights, Atlantic City, and Ocean City, and has devastated countless other towns that sit along the coastline like Long Branch, Brick Township, and Asbury Park.

As you sit at your computer and read this, these stats sound very distant from you. I’m sure that you do not hear, behind these figures, the sounds of people crying because everything they have ever owned is gone or because their boat sits five miles down the street on top of someone’s garage. I’m sure that you do not see people waiting in lines for gas for three hours or hear the beating in their hearts the first time that they step back inside the homes they had to evacuate last Monday.

Most of the time, when I hear about disasters like this, I feel the same way you do. I listen to the facts and the stories, but the truth is, I don’t know these people and I never will and I have no idea what the hell $50 billion in damages even looks like. When the tsunami rocked Japan in 2011 or Hurricane Katrina destroyed New Orleans in 2005, I felt bad and all and would maybe drop some change into a collection jar outside Shop Rite, but I didn’t give it all too much thought. This time, though, it isn’t someone else’s home city that was destroyed.

Right now, my home University, which sits on the coast of Monmouth County, has been closed from last Monday (when the storm hit) to this coming Monday, as about 1,000 people take shelter in our Multipurpose Activity Center (which is currently being used as a state shelter) and the University itself remains without power. Thousands of students will have nowhere to go home to once school starts again, and it’s a miracle in itself my own apartment, only a feet away from the boardwalk (which lies in ruins) will even be livable upon next week. 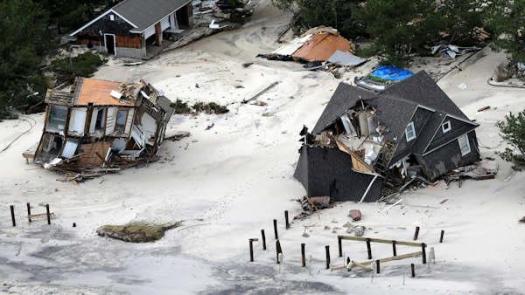 Just like anyone else, I have visited my friends’ beach houses that run alongside the bay in Tom’s River next to Seaside Heights and we danced with their neighbors and biked to the bay when the sun was setting. In Wildwood, I rented hotel rooms with my friends and we hung out on balconies and cruised the sketchy boardwalks at night, playing Frisbee and going in the ocean even if it was raining. I have run the Long Branch boardwalk, alongside couples holding hands and kids riding their skateboards, probably more than 150 times. None of this exists anymore. It is simply not there.

To love a place so dearly, as one loves a home, and then have it disappear, is unreal. It’s just gone. That’s it. And as of now, I can only sit across the Atlantic Ocean, typing on my computer, stalking this freakshow that is Hurricane Sandy on the Internet. Please God, let there be a place to go home to.