Luckily for me, this past week, I had a THIRD person come visit me here in Italy, which is literally a miracle. Unlike my own parents who I begged and pleaded to visit (note: they didn’t) my best friend Alex from home booked her ticket basically as soon as I signed my name on the dotted line in the study abroad office.

Even more luckily, when her mother and aunt found out that we were going to Budapest, Hungary for the weekend, they decided that this was the perfect opportunity for them to go to Hungary, a place being that since they have Hungarian roots, they have always wanted to visit. When we got off our plane and got on the sketchy bus to drive to our hotel, we were delighted to see that instead of staying in a per-us shitty hostel, we were staying at the beautiful Marriott on the Danube River. The day before, Alex and I had shared a twin bed. Here’s just the view from the window.

After passing the eff out and waking up at- god forbid- 8:00 am, Alex and I walked over to the Four Seasons a few blocks away (!) to have a beautiful breakfast with her aunt and her mother. Then, we booked a ticket for the double-decker tour bus and saw some of the city.

On our very rocky bus ride, we saw the House of Terror, which is a museum that explores the Fascist and Communism regimes that dominated Hungary. Fun fact: Later that day, we were in a cab and our cab driver was telling us about when he was a kid in Hungary and communism was in control. His words:

Communism wasn’t even all that bad. Now, everyone works too hard and the banks take all of your money. Everything you see on television about Communism is 50% fabricated.

Uh, okay. He also mentioned to us that he doesn’t like the Italian women because they all have mustaches. Go figure.

We also stopped at Heroes’ Square, which features the Millennium Memorial. To me, this square is just a bunch of museums and a zoo that cost money so obviously, I did not attend. The memorial itself in the center is dedicated “To the memory of the heroes who gave their lives for the freedom of our people and our national independence.”

If you walk past the square a little bit though, you will see Vajdahunyad Castle, which is a replica of the stereotypical “Transylvanian castle” (the only place I have ever wanted to go in life) and even though it’s really of no historical value I think it’s cool anyway. Plus there’s a nice ice rink. 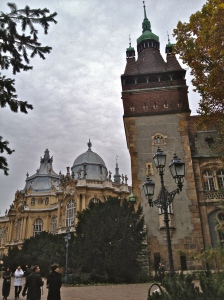 We also strolled the Christmas markets, which were pretty sweet because Hungary loves Christmas. This is pretty nice for me because over in Italy, the weather still feels like fall and it isn’t really Christmas-ed out, but Hungary is decked out in their hot chocolate and ornaments and fur and… rooster balls? Fried? Well, okay.

The next day, Alex and I went to the Szechenyi Baths, one of the public bathhouses in Budapest. This reminds me a lot of the movie Spirited Away (if you haven’t seen it, don’t worry about it). Supposedly, the hot outdoor baths have mineral water that cures all ailments, but really, it’s a big outdoor pool, people. The strong whirlpool is fun for kids (read: me) and it feels nice to be in a swimsuit outside in 30 degree weather, but really it’s a pool that’s gonna make you out 12 euros. You are also gonna see a lot of dudes in Speedos and a lot of… other things… you didn’t want to see. Old people, they just don’t care.

That day also just happened to be Thanksgiving. Obviously Hungary doesn’t celebrate Turkey Day, but everyone’s got a Thanksgiving menu for the American tourists. I’m sure Alex and her family were sad to be away from home on Thanksgiving, but honestly, I couldn’t have asked for a better time. For the first time in my life, I wasn’t driving hours to go from dinner to dinner, house to house, because my parents are divorced and thus I am required to spend the day in my Ford Focus. I wasn’t getting yelled at for not making it to every house on time, nor was I subject to my sister’s idiocy or my father’s screaming. Instead, I ate a nice meal at the Four Seasons with my best friend. We all ate, we talked, and then we went to sleep. I think this is how holidays were meant to be. You’re not supposed to be driven out of your own house because your family can’t pretend to like each other for more than fifteen minutes. I’m gonna start going away more often.

Budapest is a cool place and is worth a look, but not really more than two days. To be fair, I didn’t learn too much historical significance because I was busy hanging out with my best friends and taking really dumb pictures. Whatevs. We all need a break from learning and smelly hostels once in a while.

2 Replies to “Honeymooning Across Hungary”