We wake up early (ugh) and unfortunately, the power is out in Chill Out Cengo (double ugh). I figure I’ll just rough it and go for the cold shower, trying to think about how much better I’ll feel being clean for the whole day instead of cold for a few minutes. Now, I’m not sure which would have been worse, since it was so cold I basically spent the day covered in soap after showering in a Hostel film-esque shower by light of my cell phone.

But anyway, a shuttle comes to pick us up to go on a boat through the Bosphorus Channel and the Black Sea to Asia after we fuel ourselves with Starbucks (again) and I sit next to a rando on the shuttle, who proceeds to tell me about how in Egypt, she is a tv broadcaster and has her own talk show. She tells me all about my sign as an Aquarius and gives me her email and tells me that if I come to Egypt, I better give her a buzz. Not a bad deal for a 20 minute bus ride.

When we get to the coastline, we get on a ferry which takes us to Dolmabahce Palace, a majestic and jeweled-out palace that I should be appreciating but really I’m just tired as hell. The views aren’t too shabby from the coastline though, and I can imagine why the sultans didn’t want to leave. Too bad all I can think about it ZOLTAN! 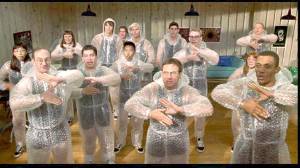 After we get back on the boat, we get another traditional Turkish meal as our ferry sails over to the Asian side of Turkey, a country that is split on part Europe and part Asia. We don’t do much on the Asia side, basically just get harassed and eat waffles, but whatevs I went to Asia! 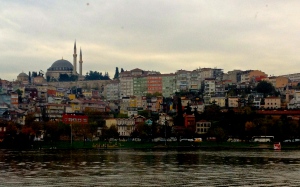 On the way back, we stop at the Maiden’s Tower, a tower that overlooks the city. It was built because a sultan got a fortune that his daughter would die before her 18th birthday by being bit by a snake, so he locked her up in the tower until her birthday. When she turned 18, to celebrate, he came to free her and brought a big basket of fruit… in which a snake had snuck inside and bit her as it got inside the tower.

Later that night, we run through the rain to get to where our pub crawl meets, a weird hodge podge of people that includes us (already a weird mix in itself), a 40ish computer program from Seattle who insists he doesn’t have a job because of the “caste system,” an army medic stationed in Naples, and two girls from Amsterdam who are clearly already wasted. Plus, of course, the leader of our pub crawl, a dad-aged Turkish man named Ali, comes with us and feeds us shots, who turns out to be the best dancer of all. Guess some things don’t fade with age.

Being out and about in Taksim Square is a funny thing. Sometimes you hear American music and you dance along, eager to have found a piece of home. While other times, much like being far from home in the first place, you hear something quite different and you just go with the flow.