So before we were all positive that we saw the Golden Gate Bridge, we joined together as our group of 13 and hiked down Market Street, the main hub street of San Fran, to the Ferry Building and the Ferry Building Marketplace, which lies at the foot of the bay. This is probably one of my favorite parts about San Fran– you have this bustling city, joined together with only a few blocks in between to a laid-back and salty water.

In the Ferry Building Marketplace, there are tons of little shops filled with wines, gourmet cheeses, ice cream, and obviously… seafood. Most of these humble seafood stands have lines running out the door, with people already crowding the bar and loading up on happy hour oysters and Anchor Steam beers. Most of them still have their suits out, fresh out of their 9-5 jobs, never bothering to waste their time staying late than so many of us force ourselves to over in the tri-state area. When you walk through the Marketplace and stand out on the boardwalk next to the water, the salty winds kind of getcha for a moment before you spot the Bay Bridge hidden behind the countless ferries and people that are loading up for Oakland across the water. 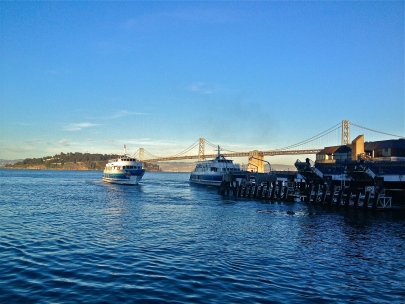 The Bay Bridge looks kind of similar to the Golden Gate Bridge from afar (well, as far as I can tell as of now) and lights up at night with lights made to look like waves, lighthouses, and gulls flying across. From our sketchy Asian seafood joint on the water, this was a welcome surprise as I enjoyed my red snapper dinner.

Nobody was lying to you when they said that the weather in this city literally changes at the drop of a hat. During the day, as you walk around, you’re wishing you brought flip-flops but as soon as you walk a few feet closer to the water you’re wondering why you didn’t bring your North Face jacket.

I don’t know what it is about this city that makes it so uniquely American; whether it’s the salty sea air, the happy little ferries, or the fact that it’s the birthplace of many important American moments. It’s also distinctly different from the warped land we live in back near New York City— here, it’s like time has stopped, where people still enjoy their boardwalks and their families and having a nice run down the water, where the only thing anyone is every in a rush to do to get some of that fresh seafood that floods the place. Whatever it is, it easily gives you a new appreciation for the country you live in. The East Coast doesn’t have a damn thing on this place.