Yesterday we enjoyed a relaxing, sunny afternoon in beautiful Wine Country, sipping on whites and reds while sampling fine cheeses before taking an outing through the vineyards lain across the rolling green hills without a care in the world. Tuscany, you may think? Maybe Napa Valley? Oh no. We were in scenic Pittstown, New Jersey, located in northwest Jersey just a little bit off of the beaten path.

At first, the idea of visiting a winery, a beloved and precious place that now makes me think of Italy in the way that tattered old photos make you think of your angelic passed dog, made me wonder if I could even take it, if I could enjoy a place that was so magnificent across the Atlantic but seemed like it could only be a cheap and sad imitation in the US of A. And to be honest, it actually wasn’t half bad. 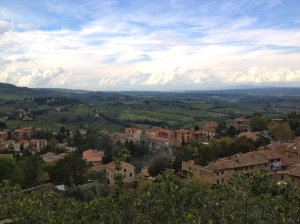 Beneduce Vineyards was one of the few wineries in the area I was able to sniff out that wasn’t an obscene distance from my house in the Middle of Nowhere, New Jersey (only about 45 minutes away) and had a pretty down-to-earth deal concerning wine tastings and tours and such, because let’s be honest, you can’t drive that far just to gulp down some wine. Unlike many other wineries I was looking at, you didn’t need an appointment to come to a tasting or 11 other people or an extra $150 bucks.

Instead, for $10 and from 12:00 pm to 6:00 pm on Sundays, my boyfriend and I sampled a pretty humble amount of four different wines, which I guess I couldn’t complain about for $10.The girl at the desk who poured each wine for us had a pretty extensive knowledge about how each was made and bottled and the quirks and its appropriate pairings. Which was made even better because with the four wines, we received some meat and cheese, which we maybe sort of substituted for lunch that day. Whoops. 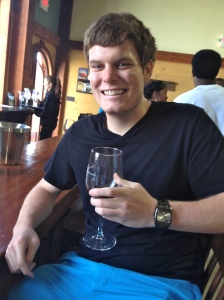 After the wines and the free glasses we received with them and the food, for some odd reason, the workers at Beneduce Winery then handed us over some keys to their golf carts to cruise their winery on their own doing. They offer a tour by one of their own workers, but I think everyone felt the same way as we did (who needs a tour of a vineyard?) because as we were cruising around in a semi-drunken stupor (after figuring out how to drive the cart, which they don’t bother telling you about either) we saw many other yippity groups giving themselves tours (AKA going as fast as they could in a golf cart without running over any plants). 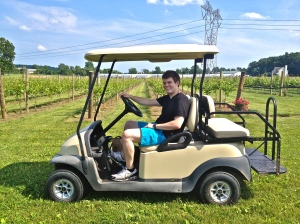 Mostly, the vineyard part is just a nice photo op, since without someone telling you about each one, the only info is a sign saying what kind of grape each plant is. It’s still fun to cruise around in a real live vineyard, and maybe stop at the hammock on the outskirts too for an afternoon nap. Hey, why not?

It may not be my beautiful Tuscany. It may not be France or Napa or any other places that house wine country. Jeez, it’s just New Jersey. But I think there is something to be said for finding gems in your own backyard. It doesn’t require a full wallet or a plane ticket or a pompous sense of what’s high class. All you need is a little research to see what’s hiding right before your very eyes. 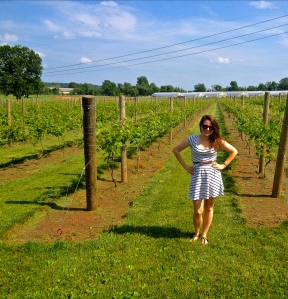