O CANADA. When I think of the land of maple syrup and moose (which, really, is all I know about Canada), the last thing that I think of is oil refineries, tankers, and a passing breeze of cold smog. However, when I opened up my windows in the early morning on my third official day of my trip on the Carnival Glory to Canada, expecting to be greeted by crisp sea winds and singing whales, this is what I got. I guess there’s a reason people make fun of America‘s losery sister.

Okay, backtrack here. To be fair, I didn’t really venture inside the city of Saint John, the largest city in the Canadian province of New Brunswick and the first stop on our five-day cruise. Before venturing off to the Bay of Fundy, a bay on the Atlantic coast famous for their having the highest tidal range in the world (it’s about as cool as it sounds), we mostly just stayed on the outskirts of Saint John near the water. The Aquila Tours bus picked us up like the lame cruisers that we are and good old Grandma Jane proceeded to show up where her in-laws lived, where her husband works, and oh yeah, the picturesque brown bay.

The extent of Canada that I saw basically looks exactly the same as Long Valley, New Jersey (also as interesting as it sounds). There are a lot of trees and… yeah that’s about it. On the way to the Bay, about an hour’s drive from Saint John taking the scenic route (thanks for nothing, Jane) we did pass some colorful cottages, churches, but unfortunately no moose.

The first stop on the tour is St. Martin’s, a Canadian fishing village on the Bay of Fundy. This story sums the place up pretty well – Jane said that in her early days as a newlywed, for her and her husband’s exciting nights out, they would take a trip to the city dump… to watch the bears dig for garbage. I wish I was kidding, because this story really concerns me for my future in Long Valley. However, nightmares aside and nonetheless boring, St. Martin’s is still a pretty little place with a lighthouse, some sea caves only accessible when the tide is low, lobster traps, and two covered bridges that I’m still not quite sure what the hype is about.

Down the street from St. Martin’s, we stop at some shamelessly plugged restaurant that I won’t even name because the whole thing is so ridiculous it’s not worth mentioning in any more detail. At low tide, one can stroll the rocky beaches and search for a “wishing stone,” which is just a normal rock that is encircled by a white line all the way around that you’re supposed to make a wish on and then give to a friend.

On our way home, someone asks Jane what she does in the wintertime, when the summer 60-degree weather becomes harsh and chilled. “I paint white lines on rocks,” she says. 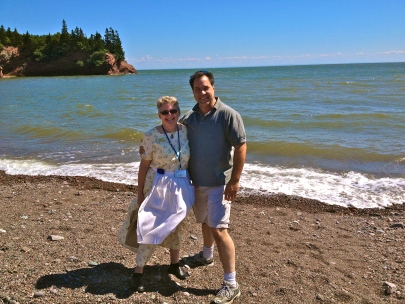